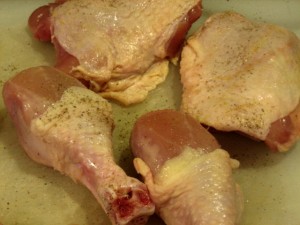 “Time for what?”, you may be asking. Well, for my mid-year cooking meltdown, of course!

But, I usually don’t put my family in danger by serving Salmonella on a plate covered in tarragon-apple cider sauce!

This cooking mishap occurred on Tuesday. I was excited because I was making two new recipes (I love making new recipes) from my new cookbook, Eating Local.  They sounded so delicious!

What caused the disaster? The 2 mutant chicken breasts (MCBs) that I bought from the grocery. Along with the MCBs, I also bought 4 thighs and 4 drumsticks.

The recipe called for browning the chicken, removing chicken from skillet, making braising liquid in same skillet, then returning browned chicken to skillet for braising. I can do that!

But, wait….The mutant breasts took up my WHOLE iron skillet (there may have been room for one additional thigh and drumstick).  One skillet! I was supposed to be able to use only one skillet!

Curse you kitchen gods!  The chicken pieces and parts had to be relocated to a big pot (now I’m on my second pot/pan) that could handle all of the poultry and the braising liquid. Damn those breasts! There’s not enough liquid to cover the chicken for braising. I ended up winging it a this point to make sure I had enough liquid by adding more chicken stock and apple cider. Now, the recipe was so out of kilter and there was no turning back.

There’s more to this sad chicken braising tale (sauce needed to reduce and thicken and didn’t, blah, blah), but I won’t bore you with that.

We finally sat down at the table at 7:45 pmish (by this time, the people in my house started eyeing each other to decide who would be the first sacrifice because they were starving to death). Everything smelled great. The side dish looked great. I’m a little flustered, but ready to eat.

We threw everyone’s uncooked pieces into the microwave (I always consider this a major defeat). And, I reheated the pot containing the remaining chicken and sauce and cooked the crap out of whatever was left in the pot (I needed to make sure it was safe for leftovers).

The consolation? The chicken did have a great flavor (once cooked through) and the tarragon sauce was awesome.  I’m definitely going to make this again, but with some tweaks. When I have the nerve to try this again, I will post it on my food blog – Suburban Foodie. I do have the potato side dish posted.

Look at the size of this sucker:

I think I’m going to buy organic chicken from now on – I’m assuming there’s no breast enhancement in those chicks!