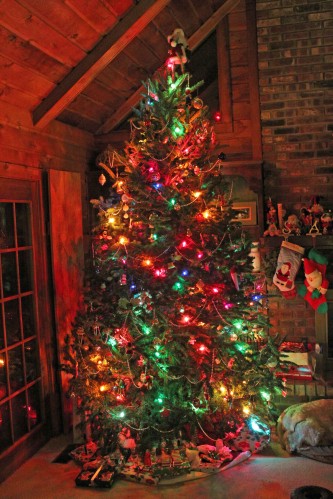 The chipmunk story has generated other memories of the many funny family stories we have experienced since our oldest was born in 1994.  Children really know how to make things interesting! I am taking this opportunity to put another one of our favorites in writing so we remember it properly.

This story happened at a work Christmas party hosted by my husband’s prior employer and I think it was December 2002.  It was a family friendly party held at Conner Prairie Interactive History Park.  Rachel was 8, Maddie was 5 and Jack was 2 1/2.  There was a dinner in the big banquet hall which was insane since there were a lot of little munchkins running around and parents trying to herd the munchkins, etc.  Then after the dinner, we were all invited to tour the grounds (while still herding our toddlers!).  Conner Prairie is a living museum which is a re-creation of an 1830’s prairie town – the staff dress, act and speak as if they are in the time period and they do not break out of character.

Okay, so back to the story.  To set the scene – the weather was cold, a little windy and lightly snowing.  The property looked picturesque in the dark with the lights and Christmas decorations.  We began roaming from building to building listening to the characters describe their lives and what they do, etc.  Okay, so we get to a building (bakery?, residence?, I just can’t remember so we will go with bakery) and all 5 of us walk in.  There were already about 15 others in the small, cramped hearth area of this bakery.  Mike was holding Jack so he could see since we were in the back of the room (Mike and Jack were standing behind me and the girls).  The prairie “character ” was a portly woman and was donned in a dress, bonnet and apron from the time period all in creams and whites (see above picture and picture a more rounded woman).  She began her spiel and all of sudden, I hear the sweet voice of my little Jackie say in his most excited LOUD tone (as if Bob the Builder were right in front of him), “SNOWMAN, DADDY!  SNOWMAN, DADDY!” 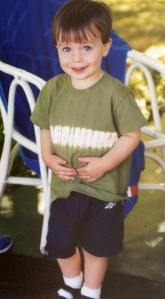 I turned around and gave Mike the eye, like “can you shush him?”.  I don’t think at that moment that I had heard exactly what he said.  But then, Jack cleared it up for me when he blurted again, “SNOWMAN, DADDY!  SNOWMAN!”  I turned around again and I saw my husband in tears from laughing so hard while also trying to hush the boy who was pointing and shouting.  Jack would not be satisfied until daddy matched his own excitement level and acknowledged how cool it was that there was a talking snowman in the front of the room!! Now, in Jack’s defense, if you look at the picture of the snowman and the picture of a portly 1830’s woman dressed all in creams, you could see the resemblance to a 3-section snowman.

Mike kept using the universal SHH sign – putting his finger to his lips to no avail.  You would think that by the 3rd child, we would have figured out by that time that this sign is usually ignored by toddlers.

So, Jack not being deterred and still utterly unsatisfied with Mike’s ho-hum attitude toward the most amazing thing that this 2-yr-old had ever seen, did this:  Jack grabbed Mike’s face (one tiny hand on each of Mike’s cheeks), turned Mike’s face toward his, leaned in nose to nose and whispered “snowman, daddy….. snowman”.  Of course, in Jack’s 2-yr old brain he was whispering while in reality he was not.  That’s when Mike completely lost it and decided to take Jack outside for some fresh air because that boy would not be silenced!

I’m sure Jack was thinking that we were complete idiots because we had failed to appreciate the fact that we were in the presence of a talking snowman and how often does THAT happen in someone’s life?!  How could he get through to us?  Well, by being loud and repetitive, of course!  I try that with the kids even now (being loud and repetitive with my requests) and it really doesn’t work.

It seemed like this went on FOREVER, but I’m sure this whole episode lasted about 10 minutes or less.  We really don’t know if the 1830’s character heard the Engledow commotion in the back of the room or not,  but it was a really small room and I’m sure everyone heard it.

It is hard to express in words how funny it was at the time.  We still whisper “Snowman, daddy! Snowman!” every now and then to each other and it always gets a giggle.