Today started out like any other day, except now we have TWO alarms (yipee!).  Yep, you heard me. It’s kind of a long boring story, but I’ll tell it anyway.

Okay, we’ve been using the same alarm clock since we’ve been married (20 yrs) – it was my husband’s. He’s had it since he was a kid – that makes the alarm clock about 30-35 years old. It has finally had enough – I’d look at the clock and it would be correct and then I’d turn around and it would say 19:35 pm.  What the heck is that? Military time? It had become possessed.

Sadly, we acknowledged that the time had come to buy a new-fangled one. After perusing our options at Best Buy this past weekend, we determined that alarm clocks just don’t have any style anymore. So Sad. Anyway, we finally picked one, but it was a little more complicated to set than the “old timer” (as you can imagine). The new ones are little computers now. Because we weren’t convinced that we had set it up properly, we have been using both alarm clocks since Monday morning. This morning , I had alarms going off all over the place – oh, brother! I think we’ve finally figured it out now. Time for the old one to go.

What to do with the old possessed clock? Loan it to the Smithsonian? Bury it in the backyard? Put it in the basement storage for it to collect dust? I’m just not sure. I’ll have to confer with the original owner on that one.

Back to this morning – after silencing all of the alarms, I’m up and at ’em, ready to take on the day! I’ve completed my morning routine, poured my coffee in my travel mug and headed out the door. Bam!  I spilled coffee on the driver’s seat (not sure how that happened with the travel mug, but oh well). Great. Cleaned up the mess, got in the car and headed toward my destination.

Oh, and yeah, I forgot my phone. I realized this when I was about 10 minutes from the meeting. I can live without my phone, right? I mean, I’m supposed to have it off from 9am to 1pm during the meeting anyway. My husband won’t call …..My boss won’t call…. My kids’ schools won’t call with an emergency, right? Nah… {In the back of my mind, I’m thinking about how many people will now be trying to contact me since I don’t have my phone.}

The destination? An insurance meeting. Yay. 4 hours long. I’ve never been to one of these meetings before (Oh, don’t get me wrong. I’ve attended many an insurance conference/meeting in my 20 yr career). This one was different. . . . . You may be wondering how? Well, read on, my friends.

My husband thinks I blacked out once I was in the parking lot (from the intense worry and anxiety about not having my phone) and then this was what I “remembered”:

Well, the host (not the speaker) was dressed in an Elmo sweatshirt and unusually chipper (I just don’t get these morning people). To sign in, I was handed a pen that had about 50 (okay, 6) bells on it.

Elmo (noticing me staring at the pen): “It was left over from mardi gras.”

Me: “Well, thank goodness. That is the most annoying pen I’ve ever seen.”

Then, I walk in and see my co-workers sitting in the front row so I join them. Then, one of them leans over and tries to explain the style of these meetings to me.  Okay…..

Apparently, the theme of the meeting was “Learning our A, B, C’s” and then our host began the meeting by speaking in an Elmo-like child’s voice. What? Was I hearing things? I turn to look at my co-worker and she confirmed that I wasn’t hearing things.

The host also had some door prizes (lots of door prizes) which were doled out throughout the meeting. At every seat was a candy with a number on it. The gift bags were labeled with sticky notes with just As, Bs and Cs.  Like, cc cc cc cc – this bag contained three Cookie Candles and one Chocolate Candle which elicited a loud chuckle from the crowd. Then there was one that had Apple Blossom Bubble Bath (a b b b) in it.

Then at the end of the meeting, she introduced the sponsor for our “breakfast munchies” as she had two door prizes for two lucky attendees. The first lucky number was pulled (not me) and then out of nowhere, the host had an Elmo book on her hands and was making the little hands clap while “yaying” in the Elmo voice. What????  Then, the second lucky number was pulled (again, not me) and again the Elmo clapping hands and voice. (see book below – this was the exact book). 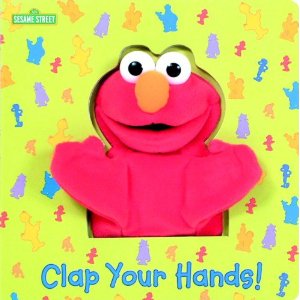 I kinda of hope that my husband is right and that I did hallucinate most of my day today. I did find myself in my car headed home wondering if what I just experienced was real.

It was definitely the most unusual meeting I’ve ever attended. But, if I imagined it, why do I have random, meaningless notes from this meeting?  Hmm….

I guess I won’t know the truth until I confer with my co-workers on Monday.