“What is that noise?”, I say to myself. “Where is it coming from?” And, then silence.

“Ah, I must be losing my mind”, talking to myself as I meander back to my office. Then, “What? That noise is back. What IS it?”

The resurgence of the noise confirms that I’m not losing it – there is a strange noise afoot in my house!  I start wandering around the house looking for the cause of this mysterious sound. It sounds like a cat in agony just after a cat fight or maybe an elephant dying. Maybe we have a strange animal wheezing its last wheezes in our basement. (It really wouldn’t be that far-fetched as we’ve had baby possums in our basement ceiling before – long story).

The noise seems to be emanating from the basement so I cautiously wander into the depths of the house to put an end to this insidious sound. Then……I see it.What? What is it? Something so shocking so as not to be believed.

It is my son practicing the trumpet (without being asked). Yep, the trumpet. 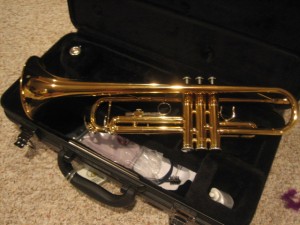 The mystery sound story happened during early June – about the second week after having his instrument.

My son (my baby) is entering junior high this fall (actually next Tuesday!), can you believe it? I sure can’t. I don’t want to talk about it or I will start blubbering. As Jack and I were walking into the middle school this past Tuesday to pick up his schedule and get his locker assignment, he looked at me and said, “Mommy, please don’t cry.” He knows me so well.

Anyway, to explain the trumpet in our house, I have to take you back to the end of this last school year. During this past May 2011 (the end of his 5th grade year), his 6th grade schedule had to be determined. At our middle school, they have to take all of the usual subjects and then, there is the tough decision whether to take band, orchestra, choir, or a study hall. Study hall was out of the question and he immediately said, “No choir!”

Why so adamant about choir? Both of his sisters elected choir at the middle school so he had attended many a choir show. I think remembering the boys (especially the 6th & 7th graders) in shiny shirts and ties doing the choreographed dance moves somewhat awkwardly (I thought they were adorable!) sealed the deal. No choir. Also, unfortunately for him, he inherited my strong inability to carry a note.

So, orchestra or band? Well, at the end of this last school year, the middle school had a “try on”. It’s really pretty great. The kids got to go and literally try on any instrument they wanted. What instruments did Jack choose?  The cello, clarinet, percussion (drums), viola and the trumpet. The band and orchestra teachers watched the children individually at each instrument selected for their “try on” and made notes. I think at this point, the teachers try to narrow it down to two instruments for each child and in doing this they will also take into account the child’s opinion.

Case in point:  Jack had been hounding me about viola lessons and I, being the good mother that I am, essentially ignored him. We had just finished 2 years of piano lessons which also included parental nagging about practicing (or lack thereof). He was gung-ho at the beginning, but then his interest diminished (maybe some of you have experienced this with your own kids). Well, long story short, he “tried on” the viola and decided that he hated it (so even if he had viola-potential, the band director would not consider this instrument for Jack).

Side note: Lesson learned for me? Listen to your gut. NO viola lessons was a good decision.

It was determined that he had the best potential with trumpet or clarinet (SO glad it wasn’t the cello). The band director really wanted Jack to pick the clarinet – apparently his try out went really well. But, Jack picked the trumpet instead. Why?  Well, it has fewer buttons! Duh! Kids crack me up – especially mine.

After practicing all summer (20 minutes a day), the trumpet-produced sounds coming from the basement no longer resemble the moanings of a dying animal. They have improved – now his music resembles the sound of someone blowing his (not hers) nose in a cartoonish, loud, exaggerated way. This is a definite improvement. Trust me.

I’m really looking forward to attending my son’s band concerts – it will be a definite change from the lavish choir shows (costume changes with each song and choreography) we have been attending since my oldest was in 6th grade (she is now a senior. sniff, sniff).

5 thoughts on “What IS that sound?”